I met a make-up artist,  Lia Stewart who wanted to do a representation of a scene with the witch from the movie "Return to Oz."  I was too much of a wimp as a child to watch it the whole way through and may have been hiding under cushions or siblings during the mental asylum scene and everytime one of those wheelie monkeys appeared but I clearly remember this witch. Obsessed with youth she kept cupboards full of pretty heads and changed them on a daily basis. As it was Lia's representation of the scene, it did not have to be exact and we had poetic license on our side. 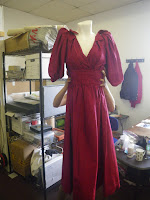 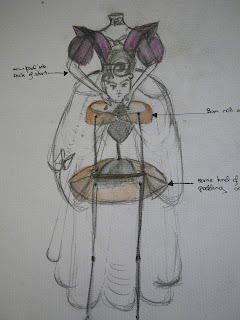 Armed with this dress, I had to change it to an oversize dress where the head of the model would be at the waist of this dress and the top would be filled by a headless polystyrene bust lovingly named 'Bernadette' or Bernie to her friends. The bust would be sitting in a backpack and held up with a scaffolding of poles and other mechanics I won't pretend to understand. Lia wanted it to look really sumptuous, with a huge rump and we got other bits of fabric to help with that.  I drew the diagram on the right, not as a design but just to get my head around the logistics of it all and where it would need to be padded out, but as usual it's not quite as simple as it looks. That diagram made me feel like this would be a piece of cake. . . and I am very good at dealing with cake.
This was the first draught.....
The head was to fit comfortably between the folds of the top section and her arms reach her head to look as if she were holding her own head. 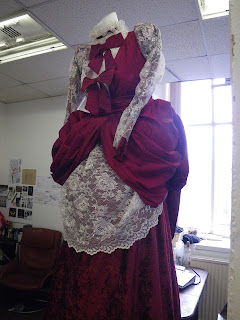 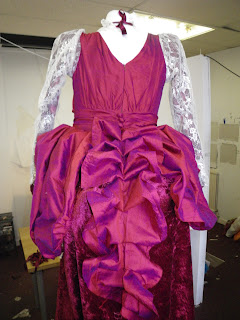 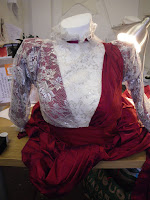 Because of opposing work schedules and holidays booked and a medley of other spanners in the works we never managed to get a fitting with the model, Lia and myself at the same time. The inner mechanisms that were to hold it all in place were not ready when we did the final sort of fitting but I think we jumped the obstacles fairly well and it ended up looking really stunning. I don't think Bernadette minded, everytime she came home with me she seemed to take it in her stride. 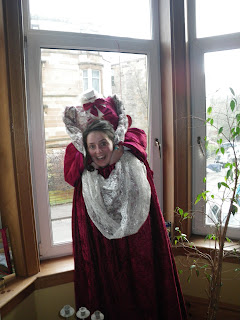 We enjoyed each others company most of the time but I was very happy to return her once she started attacking.

All the padding used to accentuate her voluptuous rump ended up being too heavy for the poor model to carry on her back, so the rump detail had to go.  Also, as I said before we never managed to try everything on the model, costume, wig, backpack and the lot together at one time so as usual its not always as uncomplicated as it looks. All in all it could probably have done with some tweaking and synchronizing watches.Having said all that the finished product was incredible, Lia had it set up with some pretty heads (other live models) in a cupboard and the witch in all her glory in the middle of the room. Her make up was brilliant, with just the right amount of gore at her severed head, a stunning use of colour around her eyes and riddled in disgusting warts I've never seen anything so strangely beautiful. It was brilliant seeing the eyes of these severed heads following you around....and here it is............drum roll please.... 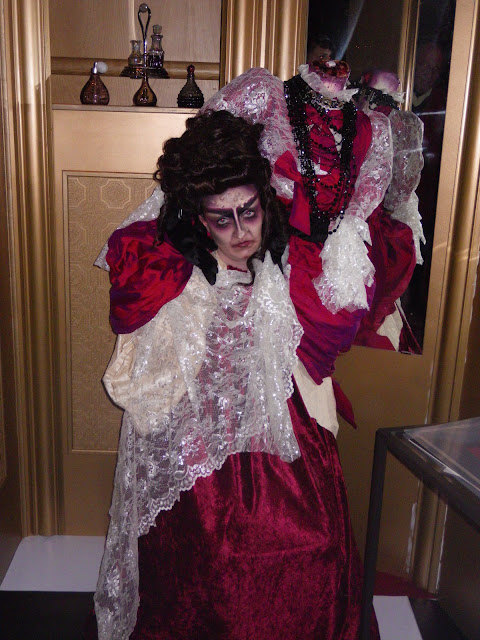